Text and Photos by Paul Hogger – Trip Director on board Reef Prince.

With a last minute reduction in guest numbers due to Covid, we steamed out of Broome on the 1st of April for what was to be 11 days of hot but near perfect weather (aside from a few spectacular evening storms), calm seas and little to no wind.

With the massive spring tides and the large amount of water pouring over the falls from the big summer wet season, we were able to concentrate on some of the lesser visited waterfalls in the southern area.

We visited all three falls in the Dugong Bay area and even swam in two freshwater holes, one of which was very high up and the first time we had experienced it.

Like always, horizontal falls was pumping and with the horizontal hotel still in pre-season lockdown in Cyclone Creek and no other boats around, we had the place all to ourselves.

Montgomery reef was one of the lowest we have ever seen it and the reef was protruding meters above the low tide water level. The bonus was the large amount of coral that was exposed for the few short hours on the spring low tide.

Ruby Falls was also pumping and the top waterhole was refreshing and clear.
We did really well on our first fishing trip in Doubtful Bay with 20 Golden Snapper and Fingermark caught in a 2 hour session in 2 boats. Our lovely chef Katrina turned them into a few delicious meals for both lunch and dinner.

The areas around Deception Bay and Sampson Inlet produced fantastic scenic tours with one of them starting at 5:30am as a sunrise tour in the gorges. The reflection photos on the water were incredible.

We visited a special and rarely visited rock art site in Rothsay Waters and at Hanover Bay it was nice to see the iconic Bowerbird nests were still there after all these years. There were even a few new ones for 2022. The on-shore entertainment that night was extra special.

The Prince Regent River never disappoints and our captain Al kindly took Reef Prince over the bar at 1am so we could enjoy an incredible sunrise in the river system followed by a full day exploring all that the river system has to offer. The highlight is the Kings Cascades waterfalls that was in full flow.
Paul the tour director put one of his Nikon DSLR’s in an underwater housing and got some great shots on the guests playing in the mini falls on the other side of the waterhole at the top of the falls.
We were even able to sit in behind a few of the mini falls.

We ventured further than the normal turn-around spot and spent a morning in York Sound visiting both the local Sea Caves, exploring the amazing rocky coastline and swimming on some very isolated beaches. That night we had a very special dinner on the bow.

The Hunter River and Porossis Creek never disappoints and we spent a night there under the incredible towering landscape.
We also watched an incredible storm with lots of lightning come past the creek at sunset as we sat on the bow and had drinks and a cheese platter.

The evening light show continued when we got to Raft Point and Steep Island for the sunset there too.

The lightning did cause a little bit of damage with spot fires all the way from Deception Bay to the Sale River. We managed to get right up close to some of the fires in the tenders.

With the reduced guest numbers, Paul the tour director had set a fairly ambitious 11-day itinerary but by day 8 we were a full half day ahead of ourselves with all the destinations ticked off. So for day 9 we steamed south to Croc Creek and Silica Beach – which we normally reserve for day 10. Croc creek waterfall was also pumping and the top waterhole still had its resident birds and Monitor Lizard around the shoreline. It was great to see them still there for another season. Silica Beach had loads of Northern Quoll tracks in the sand indicating the local family was also still in the area. Both locations are fantastic for a swim.

So on the last full day we did something really special and steamed to the Lacepede Islands.
The mornings trolling session on the low tide was super fun with catches of both Queenfish and Tuna.

You cannot go ashore at the Lacepedes due to the massive population of nesting sea birds, but we did explore all 4 islands in the tenders and drove along the shoreline seeing the millions of birds. There were also loads of turtle tracks heading up to the nests in the low lying sand dunes.
That evening we watched the sunset from the bow whilst overlooking the Lacepede Islands and eating fresh tuna sashimi and queenfish ceviche. 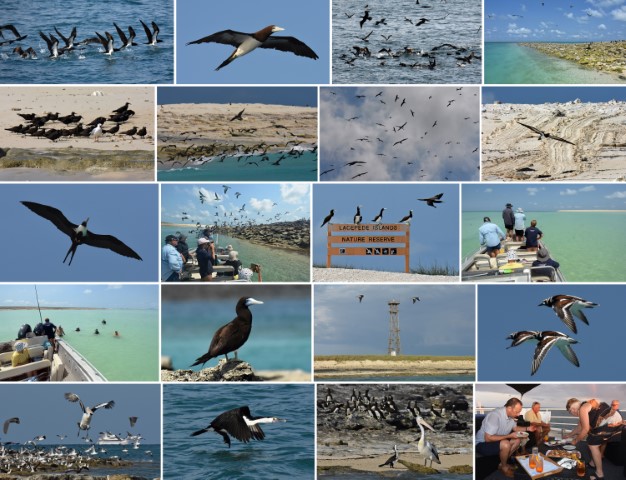 The only single headache of the whole trip came at 11pm when we went to leave for Broome only to find the anchor and chain firmly stuck on something on the bottom of the ocean. After 2 hours of trying to free it and threatening to cut it off with an angle grinder, the anchor finally let go of the bottom and we made it back to Broome – just 25 minutes late.

All in all it was a sensational trip.
All onboard (both guests and crew) remained Covid free and we enjoyed our own little virus free bubble for the whole 11 days with no other interactions with anybody else for the entire time.
Paul got to take 1000’s of new photos for the company website and the crew got to familiarise themselves with the Kimberley once again and prep themselves for what looks to be a cracking 2022 season.
And best of all, we have a fantastic crew for the season with Captain Alan, Engineer Nick, Tour Director Paul and Chef Katrina all returning for yet another season with the company.
The new staff of Libby, Cleo and Jazzmine are all fitting in nicely and thoroughly enjoying their new office in one of the best (and remote) cruising locations in the country – The awesome Kimberley coastline.